Zahid Industries Participated at the World Defense Show in Riyadh 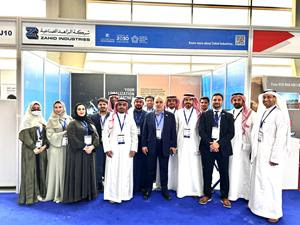 The General Manger of Zahid Industries, Mr. Alaa Akra, stated that the localization of defense industries will have a direct positive impact on the GDP of KSA due to the transfer of knowledge and technology from International companies to local companies that will contribute to the development of the entire industrial sector to align with the best industry standards and comply with International quality standards.

Mr. Akra also thanked the General Authority of Military Industries for their exceptional efforts in managing the offset programs between international companies and local manufacturers.

Mr. Barig Siraj, Vice President of Zahid Group, commented: “This participation is in line with the Kingdom’s Vision 2030 and the direction of His Royal Highness, Crown Prince Mohammed Bin Salman, to localize 50% of the defense military industries. We are pleased with the signing of a 12-year localization contract between Zahid Industries and Raytheon Technologies, as well as Zahid Industries becoming a globally approved supplier of General Dynamics Land Systems. This is only the beginning of building cooperation for future strategic partnerships for the defense industries, and we are proud to be a part of this success.”

Zahid Group have developed strategies on how to participate in this sector through Zahid Industries, a company that has now been licensed by the General Authority of Military Industries. The Group invested in special tools and dedicated facilities, attracted global expertise to train and empower Saudi cadres to become the future leaders in this sector and to become an integral part of protecting the homeland.

A photo accompanying this announcement is available at https://www.globenewswire.com/NewsRoom/AttachmentNg/ea657fd1-d62a-4eb1-a36c-13664486a1e7